PRINCETON, NJ – Jeremy Brodeur of the Maine Mariners is the Warrior Hockey ECHL Goaltender of the Week for January 3-9. 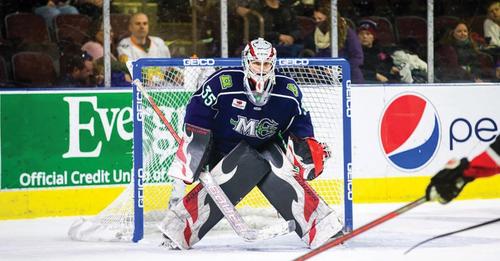 Brodeur went 2-0-0 with a 1.50 goals-against average and a save percentage of .958 in two appearances against Adirondack last week.

Under contract to Providence of the American Hockey League, Brodeur has appeared in 20 games for the Mariners this season going 9-6-2 with a 3.25 goals-against average and a save percentage of .909. He ranks second in the ECHL with 578 saves and is third with 1,070 minutes played.

A native of Essex Fells, New Jersey, Brodeur is 24-33-7 in 80 career ECHL appearances with Maine, Allen and Norfolk with a 3.42 goals-against average and a save percentage of .908. He has also appeared in three career AHL games with Utica and seven career games in the Southern Professional Hockey League with Knoxville and Peoria.

Prior to turning pro, Brodeur saw action in 124 career games with Oshawa of the Ontario Hockey League where he went 70-40-9 with 11 shutouts, a 2.81 goals-against average and a save percentage of .909.